I consider it a tragic design flaw that I have girl-parts and not even one boy-part. If I would have created the universe, I would have made sure that willing folks could sign on for a clit and a vagina and testicles and breasts and everything else all at once. Or to switch their parts around at will.

Alas, they didn’t consult me when they designed the universe, so I passed off the Nexus Vibro  to a friend who has a prostate of his very own. He tried it several times (repeatedly, over and over again, on many successive days) and then reported back to me. 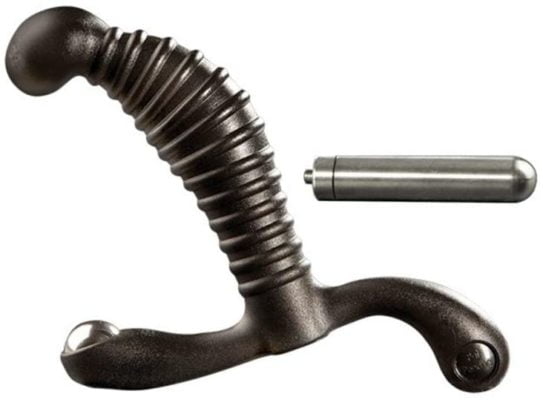 My friend found the instructions to be a bit confusing. It took him a while to figure out the functions of the vibrating bullet. Then he discovered that the batteries were nearly dead. The buzzing was far improved after adding brand new batteries, and that’s when things got interesting.

The Nexus has a small metal ball held in one of its “arms.” This is meant to nuzzle behind the balls and put pressure on the prostate from outside the body. My friend was disappointed that the ball didn’t give as much prostate stimulation as he hoped. It would be nice, though probably prohibitively expensive, if the ball vibrated independently.

Don’t worry that this toy is too large. It’s a mere 1″ at its widest insertable point, which means that even the most timid beginner should have good luck getting the toy in. However, the ridges that line the shaft of the toy do provide intense stimulation, so keep both these things in mind before you spring for the toy.

I have one big complaint about the Nexus. The box proclaims that it is for the “male g-spot.” I hate that! It’s a box housing a sex toy, for the love of lube. We don’t need to be shy. We can just come right out and say that it’s for the prostate. Yes, the prostate. You heard me. I said it. Pros-tate. Not “male g-spot.” The first exists. The second doesn’t. It’s not like we refer to the clitoris as the “female penis.” Or the testes as the “male ovaries.” Must we continue to misname the prostate?

Rant over. Please forgive me.

Once you get beyond the manufacturer’s slightly precious nomenclature, you’ll find a functional, high-end product for all your prostate pleasures.