I was kindly sent a light skinned Clone-a-Willy by the same named company ‘Clone a Willy’.

On arrival, it was packed well and discreetly addressed, 2 things I like to see, as Royal Mail aren’t really known for their gentle handling skills!

Instantly I knew that using this penis moulding kit would be mucky but fun, I couldn’t wait to try it out. 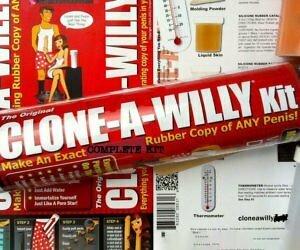 I will quickly relay the instructions;


You will find you will need the following items, as they are not supplied;


You will need 2 people to make this mold work, as it can be pretty fiddly.

This is a kit that you can have fun with, myself and my partner in crime (D) had a lot of fun, leading up to the actual molding. If you’re a fan of foreplay, then you will love the build up.

Once he was hard, I began mixing the molding powder with the 37c water for 90 seconds. During this time, D placed a cock ring around the base of his shaft, to help keep him fully erect. Once the mixture was formed, we poured it into cloneawillythe plastic molding tube, as per instructions. Now the mucky bit, he dipped his penis into the molding solution. I will say that you need to keep the penis literally dead center, unfortunately my partner was off center.

Once the mold set (approx. 2 mins), then we gently and slowly slipped the tube off from around his penis. It is best to use 2 sets of hands with this part of the process, as the mold pulls at the skin and could rip around the top of the tubing area.

24hrs later, I slowly removed the mold from the plastic casing. I found I had to cut with the scissors, around the top of the tube, so that I could begin to remove the mold. Once the tube came away, the molding around the clone, simply fell away and voila, my prize of D’s cloned willy was safely in my hands!

D had informed me that the original molding mixture was cold, which actually effected his full size being molded. I was a little disappointed as D has a glorious manhood, which wasn’t fully portrayed by this kit, however, the detail of his veins and head came out perfect. D had also asked me to advise that any man, using this kit, should fully shave his pubic area and thigh area, as the mold will pull and rip out hairs, when you remove it from your penis.

We both felt that the water will need to be warmer, as once it is mixed with the molding powder, it cools right down. The problem we faced is that it effect D’s ability to stay fully erect. Other than that, we had a fun pact evening, it’s defiantly a kit to play around with but you must following the timings in the instructions.

I really was impressed with how much detail of the top half of this clone, captured. It really did imprint D’s head to perfection but the base area didn’t turn out too well. It is messy and a tricky kit to use but over all, it’s fun and you are left with a very personal toy!

You can purchase Clone-A-Willy kits from most online retailers, there is also the option to buy a chocolate cloning kit, glow in the dark and many more.

Clone A Willy Glow In The Dark Kit