A paddle made of silicone? It slaps and thwacks real good, more so than other paddles. Tantus knows their stuff. I however do not – Paddle spanking is not my strong side as you will surely see if you continue reading this. 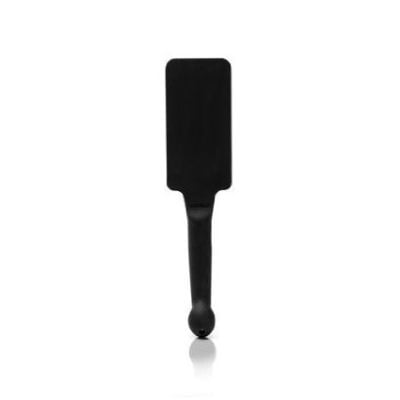 Tantus is a company I totally adore. They are the company equivalent of the awesome, but distant aunt I wish I had. Recently they released their new line of naughty silicone spankers. Yep, that’s paddles made of Tantus’ great platinum silicone. The blogger world was stirring, while I was hiding in the corner. They look terrifying to me, but here we are. Talk about expanding the horizon!

I know it’s not really a problem since you can just boil it, and it should get clean as can be. But that should not be necessary every time, so until we get a revision without the hole, I would not recommend using it without a condom. BUT, I did it for you guys. And I can report that it does not feel too good. The hole are uncomfortable on insertion and when directing it for some pressure. There are no real handle either, since the handle is actually being fucked that makes it difficult to control.

Well onto the paddle part of the toy; This thing stings like a bitch, which if you’re into bondage toys is just what you’re after! I got my partner all geared up to deliver some smacking pleasure (?!). I must say I am a serious wimp when it comes to this. But I think it works as expected. When hit by the entire flat side of the paddle it stings and leaves red, heated marks in its wake. The sensation is felt long after the spanking has ended. It’s really an interesting feeling being hit like this – it’s not for everyone. If however the tip of the paddle is making the hit, it thwacks like a whip and it really hurts. Who would have thought that harmless superhero material silicone could be capable of something like that.

When the situation finally turned, and I was graced with the Plunge I started to enjoy myself more. It is way more fun to do the spanking. However trust is essential, not just for each other but in oneself also. I can’t really control myself too well, and the Plunge makes it both fun and easy to go a little too hard at work for novices like us. The paddle part is really flexible and flaps with the slightest flick of the wrist, it smacks almost by itself. The handle however is very sturdy and firm.

In the heat of the moment it certainly adds something thrilling, but take it too far on an inexperienced receiver and things will get sore. It can be both fun, playful and teasing sex toy depending on the mood.