Move over LELO, there is a new boss of sex toys in town and there is no messing with this French connoisseur of sexual pleasure!

It’s like L’amourose have opened up my inner thoughts of sexual desire and made them into a silicone god of power. OK OK, maybe that’s an over statement but WOW, L’amourose has impressed me so far. After reviewing the l’amourose denia L’amourose Rosa Rouge, i really didn’t think anything else could meet my needs. I had previously reviewed the L’amourose MAE, CLARK and LANA. Only 2 out of those 3 hit it off with me but that’s not a bad thing at all. 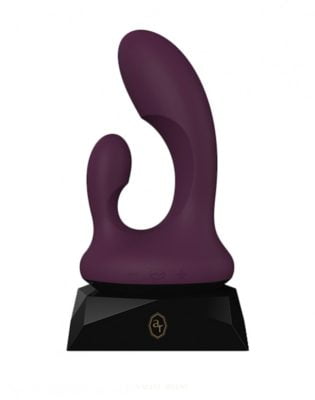 Ododi had kindly sent me the L’amourose Denia to review on their behalf, who am I to reject such an orgasmic offer?

I am not a fan of rabbit type vibrators, they just don’t really do it for me and the ears always feel like my clit is being jabbed with a rubber hammer. Could the Denia change my opinion on rabbits?

To switch the Denia on, select the + button and switch it off select the – button. There is also the ability to lock your vibrator, so that if you are on your travels with it in your bag, it will not switch on. To activate this option, hold down the – and + buttons for 3 seconds. During this time, the oval button will stay alight but once the travel mode has been activated, this light will switch off. To take it out of this mode, again hold down the – and + button, the light will come on, once the Denia switches out of it’s travel mode.

L’amourose denia The Denia comes from the l’amourose Black Diamond range, which basically means the base (which is the charging dock) simply looks like a black diamond. But does bring in a bit of class and looks fab to show off…..well, if you are like me!

Unfortunately, I did find that trying to press the buttons during use, was a little bit complicated, as the buttons are on the left side of the base. I would love it, if L’amourose decided to make their vibrators remote controllable, L’amourose denia actually that would be perfect!

The L’amourose Denia comes in black, cherise and purple.

With the L’amourose Denia, you receive a velvet storage bag, operational manual, guarantee and warranty card, charging dock and plug and a keep sake box.