Modern lingerie industry has broadened itself into a higher plane of dream and comfort level. Even though the term lingerie broadly and uniquely applies to all undergarment used by women, they are also specifically classified into various different types according to their style and design. Each specific design mainly highlights and pays homage to women and makes them to revel in their femininity. Today’s lingerie is woven to ensure the sensuality and sexiness of a woman and is enhanced to the maximum.

Down below are the different types of sexy lingerie which makes both men and women to cherish their secret fantasies and explore into a magical world of sensual appeal. 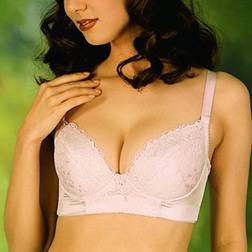 A push up bra naturally aims in giving a lift to the breasts and make them to appear more round and bustier. They give more cleavage and the latest technology allows them to have the bosom appear larger. The built in technology in the cups varies from small pillow like insert into it. Sometimes insertion of silicone or water sacks in the cups of the bras allows having the feel and look of natural breasts. Usually a push up bra has an under wiring of plastic of metallic which supports the bottom and lifts the breasts.

Before buying a push up bra, one should know the right size as a well fitting bra always adds to total comfort.

In fact the push up bra dates back to the 1880s even before the WonderBra came into vogue. The Science Museum of London exhibits a padded brassiere and is supposed to be the foremost in breast enhancing. The design is totally aimed in giving a shapelier and alluring look to it. The European exhibit is a white bra with two round white pads with a strap at the back. It is highly decorated with feathers and lace to make it alluring. They belonged to only the rich and were tailor-made to suit the exact measurements.

This was brought down to the use of ordinary ladies only when it was a featured column in the Vogue in the year 1907. Different sizes were introduced late in the 1930s only. 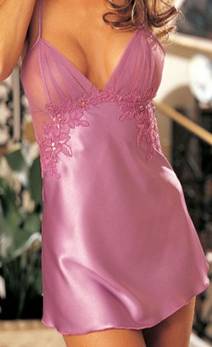 Baby Doll is yet another type of popular lingerie set and is perfect for someone who wants to strike a perfect balance between something sexy as well as not risky. They also come attached with G-strings or thongs which turn out to be a totally tantalizing outfit. It is a short and often sleeveless loose fitting nightwear. It has faintly formed cups for additional cleavage and falls above the upper thigh. When made in silk, satin or chiffon, this gives a glow to the outfit as well as the women in it. It indicates soft lushness and makes temptress of a woman.

Baby Doll lingerie is often trimmed with laces, spaghetti straps, bows and ruffles. It is named after the movie Baby Doll in the year 1956 which had the female lead role by Carroll Baker. It has now become a symbol of eroticism when worn by the right woman. With an opening in the front, it often resembles a peignoir.

A Garter Belt is historically always connected to a bridegroom’s privilege. The garter belt is usually worn by a newly wed bride and the groom removes the garter and tosses it over to the awaiting male guests. It is almost like the tradition of the bride tossing the flower to the maids around. 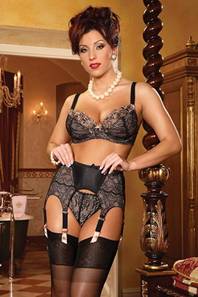 Garter Belt is an elastic piece of clothing around the waist which is held by garters or suspenders attached to the stockings. Usually two or three garters are there to hold the belt as well as the stocking. The belts and skirts of the garter are very popular for their sexiness. They are available in both forms that are attached to the camisole or as separate. This particular lingerie has both elegance and unmistakable sexiness.

The 1940s found garter belts to be in the fashion race and grabbed a b hold in the 1960s. Garter belts originated when the stockings worn by the women of those days were way high up above the thighs and did not stay in place much longer. So girdles were invented to make them stay in place. After the invention of nylon and pantyhose simple garter belts became the much preferred choice.

The garter belts usually are held in place by either four or six attachments on either side of the thigh. There are some women who prefer four attachments but the one with six is much more secure. This particular lingerie is highly erotic as it shows much more of the body curves and incinerates a man’s imagination. One considerable disadvantage that could be fairly said with this sexy lingerie is that it exposed most of the buttock area along with the associated ridges. The use of Lycra in today’s stockings and panty hose has much more elasticity and has reduced the use of garter belts among young women. 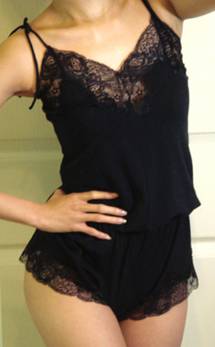 The teddy is usually a more subtle and sensuous form of nightwear. These were much preferred by women in the middle of the twentieth century. This tantalizing lingerie is a combo of both the camisole and underwear. It gives the image of an exotic single piece swimsuit with its soft and simple curves. The slight tilt and the obvious peep would make any man excited and makes the woman who wears it surer of her sexiness.

The new millennium has found a long list of specialized companies in lingerie manufacturer and the teddy has a b position. This short gown usually is of a silky, satiny or transparent lacy pattern is designed to fall just below the waist and a bit high over the upper thigh. There is an additional matching skimpy panties that goes along with it. The thighs usually are a great appeal of sensuality and the teddy leads to the greater imagination of the man. 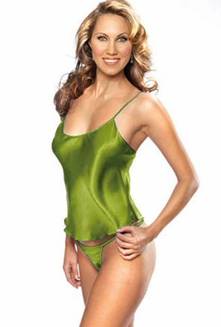 Camisoles are the type of sexy lingerie for the women who are more practical but yet want to feel sensual under their day to day dress. This looks hot on the right woman and it can be worn under an open jacket or a simple blouse or even a wool sweater with simple thongs to make it sexier. The fitting is straight and hangs loose from the top shoulders but continues to tighten and hugs closely at the waistline. This can be spiced up with matching panties which gives more style and elegance in addition to the appeal. The various materials and designs simply maximize the alluring nature. This lingerie is the most natural choice to gift a woman when a man decides to cross the string and make sure of him. 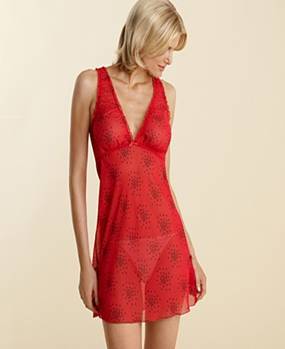 A chemise is the slightly modified version of the camisole. This is worn under a dress to avoid the transparent nature of the dress. Made of simple and straight cuts this lingerie swirls softly and makes a perfect flirt around the body. When done in silk or soft velvet material and with thin spaghetti straps that hold the chemise in place; it is totally tempting. It just falls a little above the knee and is a delicate as well as most common choice of lingerie for the practical yet assuring female. 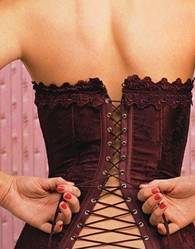 Corsets of today’s women easily charms and entrances the mind with its resemblance of the early Victorian age. Where in the usage of corsets was often a painful process that has to be endured for a long time in those days by the woman who wants to impose an hourglass figure. This particular lingerie mainly highlighted the sexiness and upheld the bust to enhance its largeness. This was further tightened harder with laces to cinch the waist to make it appear tiny and more appealing.

Modern corsets also drive towards enabling the sexy appeal but not with whale bones. Softer materials that are made sufficiently stiff give a greater feminine quality and accentuate the curves appropriately. The silk, satin and lacey materials that feature today’s corsets these days tend to give the right trendy style and attitude to drive their men crazy.

Basques and corsets are the ultimate symbol of sexiness when complimented with a matching pair of stockings and garter straps too which gives a lusty look. 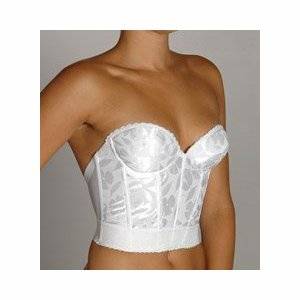 Bustier suggests a lingerie type which is exotic and appealing. It is usually a sexy bra which often comes strapless. Reaching down to the waistline it is sometimes worn with a garter straps. It is somewhere in the midline to both a corset and a bra. Earlier bustier bras where often made rigid with boning inside but modern bustiers are used with stiff and elastic material. The rigid look extends to the mid and lower portion of the torso.

The clothing material is enhanced by its type. Shiny, soft and soothing materials are used to enhance the sex appeal of a woman and bustiers can be used either with or without any additional panties.

Alluring bustiers are worn both as lingerie and an evening outerwear. Both the bustier and the corsets highly concentrate on making the breasts of a woman larger than usual and give a slim and hourglass waist line. 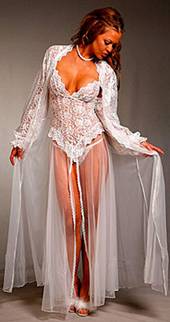 Peignoir is usually falls under a lady’s enriched desire. The soft rustles and silken material that caress the skin enlighten the moods and fills the heart with all the wanton desires that might come true in her bedroom.

Peignoir is undoubtedly a sexy lingerie which is worn long enough to reach the ankles and is accompanied with a matching sexy robe which reveals more than it hides. This lingerie accentuates a woman’s body good enough to envision her features. 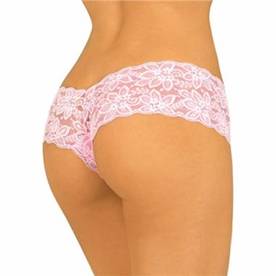 One might be bold enough to say that all the lingerie put together cannot match the exoticness, appeal and the imagination that panties can stimulate in a person. They are the most basic and yet the sexiest piece of lingerie. This undergarment comes in all materials from basic cotton to the finest silk available. This essential piece of undergarment lingers and is linked with femininity and its eroticism.

Sexy panties and knickers comes in a variety of cuts and styles. One can choose their preference according to their comfort level. A low rise panty is on the hot rise these days as it is more sensuous as it got an extra hanging look just a bit off one’s hips and provides that little naughty look. 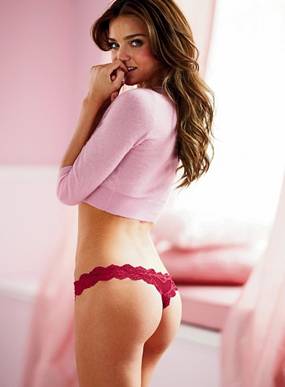 Thongs are a special type of panties which can literally knock a man with desire and sexual appeal. A secret survey reveals that more men are enticed with thongs than panties. Much more revealing, thongs with its absolute style and strings leave nothing to imagination on the exterior yet kindle the inner sexual fire and fever in men.

Thongs on the front looks very much like a normal panties but the rear is pretty much with a thin band which sits exactly in the middle of the buttocks. A G-string is even more reduced to mere strings on the hip and the back with a small piece of clothing on the front. The bareness of the buttocks is found to be sexier with this type of lingerie. In fact thongs and G-string are often thought to be same but in fact they are different in style and design.