I’m pleasantly surprised with the smaller Fleshlight’s capabilities in the form of Flight Pilot I reviewed earlier, so the natural next step was to review the brother product. Namely the white Flight Instructor. It has a custom texture wrapped in that sleek Flight case. 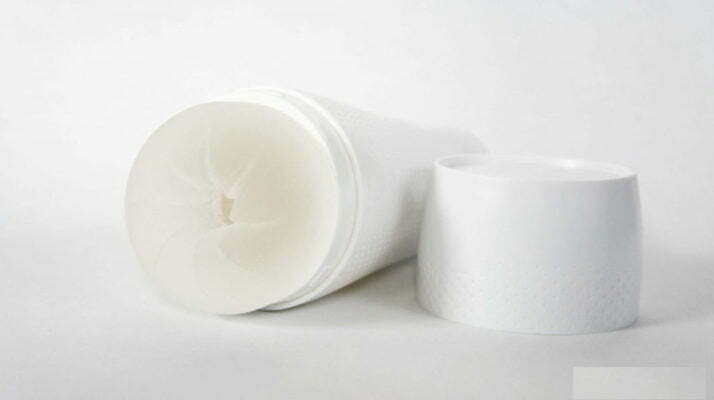 At first glance, the Flight Instructor looks like a plain old Fleshlight, one of the classic sex toys for men. Although it’s so sleek and light it almost fades into the background. The simplified case with dotted grip and the stylized logo makes this my go to undercover masturbator. It doesn’t look very sex-toy-like at all, which I like. It’s also quite a bit smaller with measurements being as follows: 8.2 inches in total length, the useable length is around 7.5 inches. The orifice is around 3 inches in diameter and the entry hole is 0.6 inches. It is 9.9 inches in circumference around the widest part, and 7 around the smallest.

The casing is sturdy plastic as with any other in their product line, and the sleeve is clear Superskin with a marshmallowy softness to it.

Out of the sealed box, the sleeve is pre-dusted with Fleshight Renewal Powder so that it feels velvety smooth to the touch. This means that it isn’t initially clear – more like frosted glass. Rinsing it reveals the pigment-less elastomer underneath. Say hello to sticky fingers! The lack of pigment makes the sleeve very sticky and it will cling to anything it touches. Other than that, it is almost odorless, seamless and not overly oily like many clear masturbators out there. It does have a bit of an oily film to it, but nothing major.

This is the sleeve after a quick rinse and drying. It’s still has that slightly frosted look, but the case isn’t transparent so I really doesn’t see the point. Still, the sleeve has a unique texture that you won’t find in any other Fleshlight or Fleshjack. Now, it really isn’t all that unique as it’s only the bumpy STU texture from the Endurance Jack halfway through, with a wide smooth canal for the remaining half. This means it is actually tighter along the textured part at the beginning and wider at the end.

Lubed up and ready – water based lubricant with Fleshlight products – it is very slick and smooth feeling. Same as any other Superskin sleeve really. The opening is fairly wide, same as the bumpy canal just ahead. Penetrating the Flight Instructor feels kinda strange. The bumps are rather large and squish together during use. Feeling more like plain ribs than large bumps. The texture focuses on the shaft of the penis. The bumps grabs onto the shaft, providing a very pleasurable massage. The head of the penis slips through to the smooth canal which release some of the pressure from the bumps. It is very unique and very stimulating – and it’s far from the norm when it comes to masturbators. They tend to tighten towards the end.

Couple this with the adjustable end cap, and you get to control suction and the intensity of the texture even more. With the additional airflow, the suction disappears but the texture really pops. With the end cap sealed it has a great suction effect that intensifies the stimulation. Personally I prefer to keep it halfway to get a little of both. Keep in mind that with the added airflow comes a lot of slurping noises that may not be the best if you’re looking at the Flight for its stealthy approach.

Cleanup is much easier with these shorter sleeves. Rinse with warm water and a give it a little massage – and you’re done. Superskin doesn’t like soap, so be sure to keep that away. It’s nice to use a mild sex toy cleaner instead, to keep the germs away. The case is both dishwasher and soap friendly though.

It is delicious in the same way as every other Fleshlight – It is super squishy, has a great texture and a wonderful quality design. The unusual texture focusing on the shaft more than the head is a welcome change, and it is surprisingly intense. Increasing stamina with each use is a nice bonus. I don’t like the sticky clear sleeve and the slanted end cap. It can’t stand by itself without the main cap.