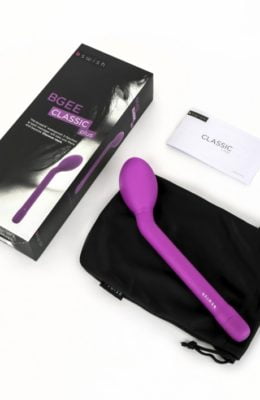 Available in magenta, gray or blue, the texture of the Bgee is far more velvety than the typical hard plastic toy. It’s almost mesmerizing. Before putting it to use, I spent a good half-hour just stroking the toy.

Of course, that half-hour was spent on the phone with a friend, working our way up to phone sex, but hey, the texture was awesome.

The vibe itself clearly is designed for the g-spot (Bgee…get it?). A long, thin cylinder connects to a bent egg-shape, which in theory should allow one to put pressure on the appropriate body part. The cylinder is just large enough to house two AAA-batteries — in other words, it’s quite small.

Turned on, the Bgee produces a low hum interrupted by occasional rattlings from the batteries. I was pleased with the level of noise produced by the toy, until I put toy to clit.

Alas, the Bgee’s quiet sound corresponds to a very gentle intensity of vibration. Even cranked up to full blast, placed directly on my clit, and encouraged by the enthusiastic talk of my friend, the Bgee took a long time to get me off.

It felt fine on my g-spot, but really it was nothing special. Because the product is so tiny, it was hard for me to exert enough pressure on my g-spot for satisfaction. Add that to the gentle vibrations, and it really wasn’t that much fun.

I give Bswish credit for turning out a product that looks professional instead of sleazy. I’d be far happier if the Bgee put out decent power, even if that came at the price of a few pictures of half-naked ladies.