I like lingerie…but I don’t own much of it.

Actually, my wardrobe and bedside drawers are filled with many more sports bras and Runderwear panties than frilly stockings and lacy bras.

There’s a few reasons for this.

The biggest is cost. Sexy lingerie can be quite expensive and, in the grand scheme of things, it’s hard to justify that cost.

I can justify buying my umpteenth sports bra or pair of anti-sweat underwear because, at this point, I run about 3-6 marathons a month and so these are very much a justifiable purchase. Sure, I also have sex a lot (more than I run marathons every month by far) but lingerie is not a prerequisite to great sex, believe you me.

There’s also the issue of fit and body image. I am one of many female-born individuals who have been brought up with a certain degree of self-loathing and the idea that I should be critical of my appearance and, ultimately, consider it in a negative light by default which can only be improved by:

I, like many others, try to counter this on a daily basis and self-love and confidence-boosting exercises are part of my self-care routine but, when it comes to lingerie, these issues are exposed much more intimately.

This is likely to do with the nature of lingerie. Lingerie, after all, is what you are left with when the body is stripped down to nothing but your underwear (in a very literal sense). This is a very exposed position to be in, not just physically but also emotionally and it can expose insecurities and self-critical thoughts just as easily as it can expose the body itself.

Finding lingerie that I feel ‘attractive’ in is a difficult endeavour, especially given that most lingerie is advertised on either mannequins that have proportions that would make even Victoria Secrets models weep or said Victoria Secrets models who are photoshopped so much that they could stand in front of their own blown-up billboard image and you still might not see the resemblance.

A realistic view of lingerie

This is not said in a derogatory sense but a grounded one. In an Instagram post exposing the nature of photoshopping lingerie models Australian model and makeup artist La’Tecia Thomas stated that “What you see online or in the media isn’t always the complete truth.” Speaking about two images of her side to side (one photoshopped for lingerie advertisement and one of her in her actual lingerie) “In this instance, I can’t even compare myself to myself.”

This makes it hard for most lingerie users to reconcile their relationship with lingerie, the value it has to them, and why they feel like they want to wear lingerie.

My own reasons for wanting lingerie are as multifaceted as the next. The primary purpose is to make myself feel sexy and confident…but to what end? Usually it’s to present that sexual confidence to someone else – typically my partner – or to get a psychological boost so that I can utilise it in important or party-based social situations.

When I choose the perfect lingerie it is something for me but it’s ultimately a tool I use that is influenced by external forces – the viewing and approval of others.

Research in to lingerie has revealed that most women feel equally conflicted when it comes to lingerie. Throughout the course of 16 intricate interviews researcher Rachel Wood from Sheffield Hallam University found that “Many women share conflicting emotions when it comes to wearing and even buying lingerie.”

The research identified many reasons that people might wear lingerie; to look and feel good, to ‘make an effort’ in a romantic environment, to ‘improve’ the body in some way, to play with gender, to gain confidence, to feel ‘nice,’ and to show an authentic sense of play around with different identities. Participants noted that lingerie was awkward, uncomfortable, and required a lot of logistical planning, could make them feel anxious, felt as if they were just keeping up appearances, seemed more catered to ‘men’ than to them, or brought up negative self-talk about attractiveness.

But it could also be a powerful thing.

Many women adopted lingerie to embrace themselves, to highlight aspects of themselves that they liked, to surprise their partners (which, in turn, made them feel good and could lead to mutually enjoyable sexual experiences), to feel sexually desirable, and to just do something ‘nice’ for themselves. Some even used lingerie in cross-play activities – where their male partner would wear lingerie too and so their was a mutually performative element of lingerie in a loving relationship dynamic which fulfilled a sexual fantasy and facilitated further bonding.

In short, lingerie can be a force for good and can make a person feel good and improve upon their mental health substantially, but not without a conflict and a lot of psychological processing.

Personally, when I put on the right lingerie I feel like a badass and I am definitely in a better head space for it. I rock that look, I move differently, and everything just feels a bit more thrilling and self-assuring. I like it. But that act of shopping for lingerie? It’s a mental minefield. 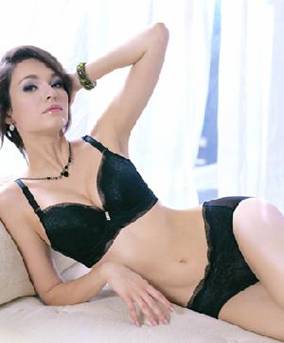 And, sure, I wear lingerie to be visually attractive to someone else, but I enjoy doing that; it’s my intention to feel attractive by wearing lingerie, not something that is personally imposed on me nor expected by my partner. The performance of sexual empowerment here is valuable to me, and my autonomy in it is something that I feel self-assured in, even if I’m aware that it’s an autonomy that is influenced by, and plays on, the expectations of society.

What can we take away from all of this when it comes to our own relationship with lingerie? If I were to come to a singular conclusion it would be that perhaps the purchasing and use of lingerie is much more of a soul-searching experience then we’ve ever given it credit for.

The construction, distribution, advertisement, and social, cultural, and history of lingerie is an absolute minefield. It’s a tangled knot of many different discourses – bringing out ideas of postfeminism, the male gaze, body politics, self identity, sexual consumerism and so much more…all the while also being a key component of the adult industry which many of us participate in and enjoy.

So, next time you buy (either for yourself or for a partner) lingerie and your mind starts to swim all over the place with a variety of different thoughts why not stop and pause for a moment? Instead of letting all of those thoughts pass through your mind and taking them as reality, take the time to deconstruct some of them, think about where they’ve come from, what they can tell you about society, and what they mean to you.

Ultimately they may have no impact. Lingerie isn’t just theoretical, after all; it’s sexual, sensual, and adds a very physical element to sex which can, itself, be very pleasurable. However, thinking about lingerie from a critical perspective can sometimes offer a very interesting lens through which to dissect our relationship with identity and attraction and it’s one that I think is well worth contemplating.

A Guide to Buying Sexy Lingerie