Directly from Tokyo, Japan – Tenga’s original premium masturbator. It has been my test partner for a while now, and I will spoil the good stuff right here and now. It is freaking awesome! 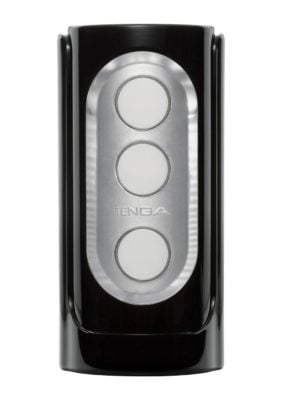 The Tenga Flip Hole is a male masturbator that stand out from the crowd. Made out of a hard plastic shell that consists of two parts hinged together on the short side. It is held together by a removable bracket, which also doubles as a closing lid when sliding in from the reverse side. This keeps the toy safe while it’s not in use as well as keeping the toy closed when it is. Sometimes it’s a bit difficult to fasten the bracket correctly on the tracks – especially one-handed. But the design is pretty sweet.

The outside has a window cut out on either side, each with 3 buttons, you can use to control pressure. In reality they aren’t buttons, but part of a firm plastic plate inside the squishy TPE material. It helps to apply pressure to the deepest end, along the length or at the opening.

The Flip Hole product line is also available in different textures. This includes Black, Red and Silver in addition to the White one.

Some of you may know that Tenga themselves states that this toy has an intended lifespan of 50 uses, which for the price would be overkill in my opinion. However, I can stop you right now and confirm that the toy will not dissolve, rip or degrade in any other way equal to the Fleshlights and Fleshjacks. I have had mine for a year, and I have lost count of the times I’ve used it. No need to worry!

Size wise it is just as big as the Flip Lite US, which means it holds plenty of room for dicks of all sizes. In further details it measures 17.5cm in length including the cap and it is 7.5cm wide.

The filling is super soft TPE gel stuff, with an awesome texture – Just take a look at those pictures. There are crazy amounts of nubs, orbs and ribs along the toy and it ends in a great, big cushioning ball ensuring optimal comfort.

Using this toy is absolute bliss. It is the softest one of the Tenga Male Masturbators, but it isn’t too soft that the texture disappears. Compared to the Flip Lite Black this is a much more comfortable toy. It does have far more squishy material, and the excess kinda pushes out of the side openings – giving the space necessary to fully enjoy the texture. It does look a bit weird at first, but it is perfectly normal. In addition the opening is a lot smaller, and it has flaps that close the opening. Not only does it feel good pushing past these, but lube and other fluids are held in place even after you pull out.

The feeling is kinda soft and intense at the same time. Soft in the meaning that it does not sport the same heavy suction as the Flip Lite Black and the nubs are deep massaging and teasing at the same time. And intense as it can make me come faster than any other toy I own, depending on which way I hold the toy and how I squeeze the side panels.

It offers stimulation on all sides of the penis, which is wonderful, and you’ll feel more of the texture than traditional male masturbators. This is because the material bulges out of the side openings, rather than compress around your cock. This has an extra effect that it does not feel too tight, and it’s possible to adjust pressure with the manual push buttons. It really does provide a wide array of possibilities. The side panels are a genius addition. It enables you to apply pressure along the shaft, or at the opening or the end of the toy. This is something unique to the Tenga Flip series and one of its strong points.

Also because the texture is slightly different on each half, it produces a different sensation when rotated. It is quite possible to differentiate between the two sides.

Quality wise it is top-notch. The TPE filling has not suffered any visible damage at all, and does not become unbearably sticky. Also it doesn’t look like it would turn yellow over time like the Fleshjack Ice, to my knowledge, tend to do. The only complaint would be the hinge. It seems very brittle but despite that and with the heavy use this has been through it holds up really well. One weird thing is that it has an air bubble right next to one of the buttons. This blows up when I add some pressure and it looks really freaky. But apparently it is supposed to be like that to take some of the tension away from the material. It doesn’t look like it will ever pop.

One reason I love the Tenga Flip Hole, and a reason that should be enough to make everyone run to buy one is the ease of cleaning. It’s as simple as removing the bracket, opening the toy and rinsing with warm water. For it to dry completely it’s possible to rest the body of the toy on the bracket. Neat!
Packaging

The Tengas come in a clear plastic tube along with three travel sized lubricants for different feel during use (Review Coming soon). It’s sealed with clear plastic to prevent tampering, which is something I’m always thankful for. The packaging is simple, classy and suits the product well.

I love this sex toy. It feels absolutely fantastic and is incredibly easy to clean up afterwards. It gets almost everything right, and I would not hesitate to recommend it to my readers. It is a bit on the pricey side, but it’s so worth it! This is one of my absolute favorites of all time, and it is definitely a toy I reach for often.