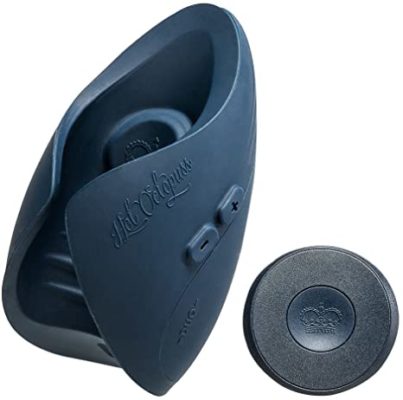 It’s a rare opportunity that I am able to get my naughty little mitts on a male sex toy, so when Hot Octopuss asked if I would review the Pulse for them (in return for an honest review), I jumped at the chance.

From the outset, the Pulse is different from any other male masturbator. It is not a cock sleeve that works with friction, does not work with vibrations, like female sex toys but it works with something called oscillation. Basically, it works on submitting waves of pulses through out the specific part that the Pulse is attached to. This is a nifty new(ish) avenue for a sex toy to go down and a very clever one, if I do say so myself.

Your male partner can use the Pulse as a simple ‘cock sleeve’, as it has two wings that will wrap around the penis shaft (depending on the girth of the penis). It also has a ribbed section, within the inside of the Pulse’s body.

But the star of the show, has to be the Oscillating vibrations, which are released via the 2 pence sized round ridge, within the Pulse’s surface.

To operate the Pulse, there are two buttons (one next to each wing). They are marked plus (+) symbol and minus (-) symbol. There is no On/Off button, you simply press the + button until the lowest vibration setting can be felt and then continuing holding down the + button, until you reach a comfortable speed. To lower the vibrations, keep your finger on the -, until you are satisfied with the level you are on. To switch off, hold down the – button. To charge; there is a little nub on the thicker end of the Pulse, if you lift this up, you can place your supplied charger female part, into the charging slot. It takes approx. 4 hours to fully charge the Pulse, which you will get around 2 hours play time out of it.

The Pulse is made from 100% Silicone and has a plastic outer casing on the female stimulation section. Unfortunately, the Pulse is not waterproof or splash proof, so no bathroom fun for you! Also, keep in mind that when you are cleaning this sex toy, you need to use a clothe and can not submerge the Pulse in water.

Playing about with the Pulse, it became obvious that the wider you open the wings, the lesser then pulsations become and therefore less effective. I would probably think that the Pulse would be preferred for dicks that are 2″ and less in width. Mr Monkey and I hit the issue of trying to place the Pulse on a 100% hard penis, so we had to wait for him to calm down. It was much easier to place the Pulse on a flaccid penis or semi and allowed him to grow, the Pulse seemed to be a much better fit. Although, my hubby is 2″ wide and 7.5″ in length, we did both agree that the Pulse maybe a male sex toy that is suited more to the ‘smaller’ trousered man.

The Pulse is obviously not intend for internal use, it is a sex toy that is solely for external use. A man can use the Pulse on his own for solo time, or with his partner for foreplay time.

It did become slightly awkward with positioning ourselves to get the full effect. Well, mostly I was bending like a Russian Gymnast, which in turn made me realize that I really do need to start doing yoga or similar!

But once both positioned, the Pulse, combined with the fella slowly grinding against me, was rather nice. It wouldn’t bring me to orgasm but for a teasing time, this curled my toes. I was a little confused though, as you are not supposed to put pressure on the oscillating pad but for it to have any effect on me, he had to put slight pressure onto me via the Pulse.

Watching him testing out the Pulse, was rather amusing. He slowly moved it up and down his shaft, until he found the ‘toe curling’ spots and enjoyed his solo time. He has informed me that the oscillating pad had the most effect around an inch from the base of his penis. There is a bonus; no lubricants were needed for this play time!

It’s not the quietest sex toy but it’s not the loudest either but it’s safe to say that you won’t be hearing this being used, through closed doors.

This self titled ‘Guybrator’ seems to bringing in a lot of positive vibes from the community. From men who suffer with erectile dysfunction and for couples who, for one reason or another, are not mobile enough to partake in sexual shenanigans. Personally, I can see the Pulse being very fitting in this area of the market. It allows the man to enjoy sexual stimulation, with a (majority) hands free experience..

You are looking at an RRP of £69.99 GBP for the Pulse. It’s a price that would be expected for a male sex toy, such as this. BUT I would say I’d be much happier paying that price, if the Pulse was waterproof.

I would have preferred the vibrations on the Pulse to be slightly more stronger. Once the Pulse is placed on the penis, the vibrations just don’t seem to be AS strong as they are, when held in the hand. I would also suggest to Hot Octopuss, that the Pulse should be made 100% waterproof. I could see this being a sex toy that is enjoyed in the bath, by many couples.

I can see a lot of potential with the Pulse by Hot Octopuss, seeing as this is the first generation (2nd on the way!) and has pretty much hit the nail on the head with male pleasure. A few small adjustments, in my eyes, would make this the best male sex toy on today’s market!