A whistle-stop literary erotic-odyssey, in all its explicit glory!

Some of us read it out of curiosity. Some of us read it just for a laugh (I personally find the fact that the protagonist says ‘holy’ 116% more than Robin out of Batman and Robin – every 3.5 pages and every 3 episodes, respectively – particularly amusing). Some of us gave it a go simply because it was thrilling to secretly read, thanks to the Kindle we got for Christmas, something that was unashamedly made up of 13% sex while surrounded by a crowd of disgruntled commuters waiting for the delayed Bakerloo line at 8.23 on a Tuesday morning. 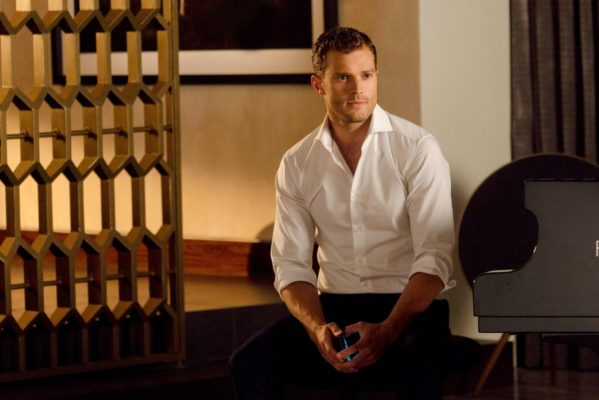 Whatever your reason for picking it up, for many, Fifty Shades of Grey was many readers’ first foray into the world of erotic literature, mainstream or otherwise. It was the first time many had read a book that didn’t shy away from the eye-rolling (mentioned 14 times), lip-biting (mentioned 43 times) and gaping (mentioned 23 times) world of sex. The content of the book set the media aflame with discussions over the language used, the sex acts celebrated, and whether or not we all thought this was all, ahem, entirely suitable, really, to be honest. From teachers to politicians, journalists to blokes down the pub, the world went all a quiver about the naughty book that women (even our mums) were enjoying. Sales of luxury sex toys and kinky bondage gear went through the roof. Everyone got a bit carried away with Christian Grey, and something called an “inner goddess”.

While we don’t approve of murder in real life, we’ll happily pour over pages of it in print. But we all get very flustered and hot under the collar by a portrayal of sex

But, sorry to break it to you world – this is nothing new. We’ve been writing erotica since… well, since we’ve been writing. In English – and it’s the same in all languages – some of the oldest writings are the most filthy (and, of course, the most fantastic). And, actually, it’s only very recently that this kind of writing has been seen as so scandalous and news-worthy. Other ages thought nothing of it – to them, sex carried no more taboos than food, sport, or war. The Greeks permitted writers every licence. The Romans did the same, and even the puritanical Jews were down with the dirty. To be honest, they would’ve thought us very odd. Particularly when you consider that while we (thankfully) don’t approve of murder in real life, we’ll happily pour over pages of it in print – with all the explicit, gory details. Not a single eyelid is batted. But we all get very flustered and hot under the collar by a portrayal of sex, something many of us (you lucky bastards) do every day. Pretty weird, right? 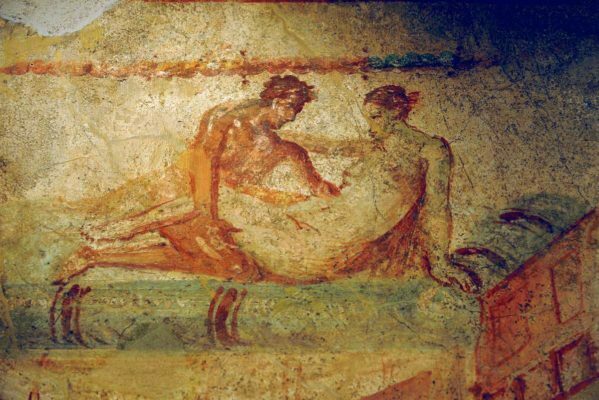 The dawn of humanity

First stop, the Sumerian in Asia Minor, about four thousand years ago. These guys and gals are the oldest civilisation we know of that had a literature, and yep, you’ve guessed it – they provide us with the first love song on record. It formed part of a marriage ceremony of sorts, and loosely translated, first saw the female exclaim

“You have captivated me, let me stand trembling before you,
Lion, I would be taken by you to the bedchamber”

before the lucky chap would respond

Michael Buble, eat your heart out…

Monogamy wasn’t highly regarded in Greek morality, and they are a civilisation known for acquitting suspected criminals simply because they bared their breasts (based on the logic that such beauty had to be divine – it’s true, look up the lady in question, Phryne).

MYRRHINE, as she comes back with a pillow: Get up.
KINESIAS: But I am up.
MYRRHINE: You are and all!

But it’s not only the men who begin to miss a roll in the hay: the heroine, lamenting the condition to which the war has reduced her sex, complains that she hasn’t “seen an eight-inch penis about, which could have consoled us”.

Yes, the holy book itself does have some rather racy passages, particularly in The Song of Solomon:

“How beautiful are thy feet […] thy thighs are like jewels […]  Thy two breasts are like two young roes that are twins… How fair and pleasant art thou, O love, for delights!”

It’s a little known fact, but lechery is as common in the Bible as romantic love.

Those cheeky Romans loved a bit of lusty writing. The famous Ovid, who was born the year after Julius Caesar was assassinated, wrote The Art of Love, in which he outlines, frankly and with obvious glee, what he expects from a jolly good romp:

“What I like is a deal that leaves both partners exhausted […] I do not want any girl doing her duty for me. What I like to hear are the words of utter abandon […] Let me see my girl with eyes that confess her excitement”

For the Romans, “virgin” referred to a woman who retained her complete independence of the opposite sex.

He goes on to give women a bit of bedroom advice, providing a handy guide to the best positions, claiming that you should

“Lie on your back, if your face and all of your features are pretty. If your posterior’s cute, better be seen from behind […] Little girls do all right if they sit on top, riding horseback”

Bonus fact: “virgin” meant something very different to the Romans – nothing to do with whether you’d had sex or not. To them, it simply referred to a woman who retained her complete independence of the opposite sex.

During this period, most writing was religious and scribed by monks. However, pornography did still exist, mainly in the form of jokes, and even in the famous collection of godly papers called The Exeter Book, there’s some very interesting double-entendre riddles:

No.45:
“I have heard of something growing in a corner
swelling and standing up, raising its covering.
At that boneless thing a proud-hearted bride
grasped with her hands”

Have you guessed the answer? It’s a lump of dough, of course. You’ve just got a dirty mind.

A little later, between 1391 and 1399, our very own Geoffrey Chaucer scribbled his famous bawdy masterpiece, The Canterbury Tales. Most of us read the arse-kissing scene in The Miller’s Tale during our English GCSE, but I doubt very much that your teacher shared the Wife of Bath’s retort to her jealous lovers:

What ails you that you grumble so and groan?
Is it because you’d have my cunt alone?

Shakespeare was as sex-crazy as the rest of us. In the poem Venus and Adonis, the bard introduces us to the goddess, who “red and hot as coals of glowing fire”, tries to seduce a beautiful young man called Adonis. His depiction of female sexuality still gets people’s knickers in a twist today, particularly when

“glutton-like she feeds, yet never filleth;
Her lips are conquerors, his lips obey”

The English Civil War did funny things to pornography. In the immediate aftermath, it was pushed underground, along with dancing, cards and theatre, all thanks to those pesky Puritans. But then, in a complete flip of morality, there began one of the most openly reckless licentious societies which we have on record. To give you some idea, here’s a poem written about Nell Gwyn, one of the mistresses of King Charles II:

She was so exquisite a Whore
That in the Belly of her Mother
Her Cunt wwas plac’d so right before
Her father fucked them both together.
The 1700s and the Victorian Age

Then came the Victorians. From the Memoirs of Jacques Casanova, through to the eleven volume pornographic epic My Secret Life, this era gives us some of the most colourful crude writing we could ask for. In Balzac’s The Wife’s Appeal, for example, a female character exclaims to her lover

“I love you so much that I would like to eat you up… no, better still, to have you in my flesh, so you could never leave me”

to which the man (who happens to be a priest) replies

“I would like it too […] but you cannot have all of me there. You will have to be content with having me in detail, by inches!”

“The other ladies gathered around us, their kisses rained on my neck and shoulders, and the pressure of their bosoms was against my back and sides […] I seemed about to mingle by being with them all at once […] with but a few thrusts […] the rosy cheeks took on a deeper dye, her eyes swam, her lips parted, and I felt a delicious baptism of moisture on my shaft”.

And here we are, arriving at the 20th and 21st century. Phew, what a ride. Hope you’ve enjoyed it. Sadly I don’t have enough space to go into detail about the modern pornographic classics – but from Lady Chatterley and D.H.Lawrence, through to the gorgeous novels of Anais Nin, there’s an endless treasure trove of erotica to explore, and I’d urge each and every reader to break up with the likes of Christian Grey and move on to something a little… meatier. Excuse the pun. But it wouldn’t be right to end without an extract from that most famous of erotic novels, Henry Miller’s Tropic of Cancer. If you weren’t already offended, prepare to be now.

I know how to inflame a cunt. I shoot hot bolts into you […] I make your ovaries incandescent. […] I have set the shores a little wider, I have ironed out the wrinkles. After me you can take on stallions, bulls, rams, drakes, St. Bernards. […] I am fucking you […] so that you’ll stay fucked.

Glorious. Not an “inner goddess” in sight.