Pussy pumps, in my opinion, are wonderful little devices that may add a whole new dimension of enjoyment to your sex life. At first, they can be a little daunting. I’ve been there before:

Is it going to hurt or harm me?
Will my vagina resemble the pumped pussies I’ve seen in pornographic films?
Is the swelling going to go down?
Will it be off-putting to my partner?

I’m delighted to add that since those early days we now love using pussy pumps together. I’ve seen a lot of queries about them on the internet from women and men who want to use a pump on their partners but don’t know where to start. So, here’s my guide to getting you started enjoying pumps as much as I do.

So, why use a pussy pump? 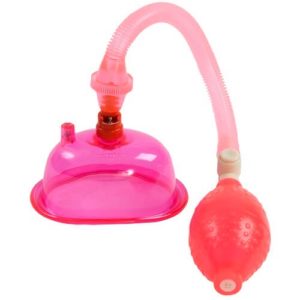 Why is it important to take some measurements and buy a pump that fits?

I’ve tried a lot of pussy pumps, and I can tell you from personal experience that a cup that doesn’t fit will only cause you agony or disappointment. From just above the top of your clitoral shaft (where the fatty section of the pubic mound begins) to your perineum, take a measurement. (It’s just below your vaginal opening.) You can also measure the breadth of the bikini line from one end to the other. You’re unlikely to find an exact match, so look for a pussy pump with a cup that approximately matches your specifications.

When the cup is too large:

Cups that are excessively big will cover your anus in half (or entirely). This means that every time you “pump,” it sucks violently at the extremely sensitive and delicate skin around your anus, which is quite painful. The majority of the sucking and tugging sensations will be felt on your poor booty rather than your pussy, and you’ll have to stop pumping before you feel much sensation on your vaginal area since your butt aches too much. Because your pubic mound curves, you can’t even shift the cup back. In general, the cups on pussy pumps don’t curve far enough to allow you to place it high enough on your pubic mound while maintaining an airtight seal. As a result, cups that are too big hurt.

When the cup is too small:

After my first experience with a cup that was too big, I decided to buy a “petite” pump. After my first experience, I concluded I must have a small vagina. This was the second blunder. Too little cups are a disappointment. The little cup was fine, sitting easily over the right places, but the cup was full after two pumps (with barely any sensation). I was unable to extract any more air from the cup. Useless.

How do you use a pussy pump?

Surprisingly, there are a few things you can do to make your pussy pump experience more delightful before you even start using it:
Wax or shave your vaginal area. (Or your bikini line, which is where the cup will be placed.) Understand that this is not a necessary, but being smooth and hair-free can help you get a better seal. It is still possible to use a pump without reaching for the shears, although the seal will be more finicky.

Buy some lube. Applying lubrication around the cup’s edges and onto the skin where the cup will sit will help you achieve a better seal during use.

Allow lots of time for this. A pussy pumping session usually necessitates patience and time. Especially if you want to have a pumped appearance. It takes different amounts of time for different people, and speeding it could make you uncomfortable and ruin your pleasure.

Getting an airtight seal can be a little tricky at first. Laying on your back with your legs open is the greatest place to begin. Make sure the bottom of the cup is covering the vaginal opening and resting somewhere on the perineum, with the top of the cup resting on your pubic mound.

Apply a little pressure after it’s in place. Push the cup gently into the skin. This aids in the formation of a better seal and ensures that everything is airtight. Squeeze the bulb and gently release it once this pressure has been achieved. You’ll notice the vagina being pulled into the cup if you’re in the right spot. If a seal cannot be achieved, move the cup slightly or jiggle it a little and repeat the pressure and squeezing operation.

If you have any doubts about utilising a pussy pump on your companion, pass the cup or bulb to her. Because she can feel what’s going on, she’ll be able to manoeuvre the cup into the correct location more easily. Hand her the bulb and monitor what she does and how much she can handle if you’re scared about hurting her or aren’t sure what her limitations are.
Important things to keep in mind while using:

The suction effect is strongest when the bulb is released, not when it is squeezed. This is critical. You don’t want to make her feel bad. (Or lose suction) At first, my partner would squeeze the bulb slowly before quickly releasing it. This should not be done. Although it may appear to be more rational, releasing the bulb rapidly causes the air in the cup to be drawn out very quickly. As a result, her vagina will be sucked fast into the cup, which can be unpleasant and powerful if she is already at her limit. Squeezing the bulb slowly breaks the seal, allowing the cup to slip off. “Squeeze quickly. The golden rule is to “release slowly.”

Take it easy. Pumping your pussy feels a lot more intense than sucking with your lips. Probably because the seal is stronger and it covers a wider surface area. The mouths are soft, but the cup’s edge is stiff. It may feel as if the edges are digging in deeper as you progress. Always take it slowly.

The difference in pleasure and agony between one and two pumps can be significant. This isn’t a test of strength, and you shouldn’t be squeezing that bulb like you’re taking someone’s blood pressure. (Unless, of course, you enjoy it.)

Now you can play:

As you get more comfortable with the pump, you’ll see that it’s a “stop and start” game. Take it carefully because there can be a significant difference in intensity between one and two squeezes of the bulb. Give her one or two squeezes until she tells you she’s reached her limit, and then hold it there for her to become acclimated to the sensation. This can be a few seconds or a few minutes, depending on how long it feels.

During these breaks, keep her “topped up.” Even with the tightest seal, air can (and does) escape back into the cup. As the pressure “eases off,” she will be able to feel it, and the cup will gradually slip off this manner. This doesn’t happen often, but if it does, you’ll need to improve your cup seal. To keep her topped up, simply depress the bulb approximately a quarter of the way and release every five to ten seconds.

You can now push her a little harder once she’s become accustomed to the sensation. Squeeze the bulb once more (or twice) and slowly release it.

During a session, let off of the suction once in a while. If you pump her up, maintain her at the limit for a bit, and then release the suction a little or all the way, it feels so much nicer (plus it will allow her to play for longer). This allows the blood to flow and gives her a chance to rest from the potentially excruciating sensation of being sucked at all times. You will not be set back or forced to start from the beginning if you do this. It won’t make the edoema or sensitivity worse. Make sure to return her to her original position before releasing the pressure and see if you can go a little further. For this, I recommend getting a pump with a rapid release valve.

For as long as you both want, keep repeating the action of pumping, halting, releasing, then pressing a little more.

What does it feel like to use a Pussy Pump?

The first few sucks are incredible. You can feel the suction on your clitoral area at this point. You can feel your clit hardening and a small swelling in your body. It’s a pleasant tingling sensation.

The sensations can become very powerful as you progress. If you want a swollen look, you’ll have to push it a little harder, and it’ll be a pleasure/pain experience at this point. On the one hand, this suction feels amazing on your private regions, but on the other hand, it can be uncomfortable, particularly around your vaginal entrance and perineum, as well as the cup’s edges, where it can dig in as the pressure grows. It isn’t a painful experience (unless you rush it or go too far too fast), but depending on your preferences, the intensity can either enhance or detract from the experience. I recommend starting slowly and getting acclimated to the sensations before pushing yourself beyond your comfort zone.

When you use a pump, you can feel psychologically stimulated in addition to the physical sensations. The idea of your partner’s palm resting on the outside of the cup but you can’t feel it, the naughtiness of the position, and, of course, seeing him or her enjoy the experience are all mental turn ons.

How long will she stay swollen?

The swelling is temporary and it will begin to subside pretty soon after you stop pumping. You will probably notice it going within an hour and by the next day everything will have returned to normal.

Can pussy pumping cause damage?

I’m not a doctor, and I don’t have any training in this field. Only from my experience can I speak. I’ve never had any harm, and I’ve never heard of it occurring to anyone else, but there’s always the risk. If you take it gradually and listen to your lady, you’ll have a far lower risk of causing any harm. If this concerns you, do more study.

I hope you found this helpful. And for all the guys out there please don’t feel left out, we have plenty of Penis Pumps for you to have a go with and a bit more info about Male Sexual Enhancement here.